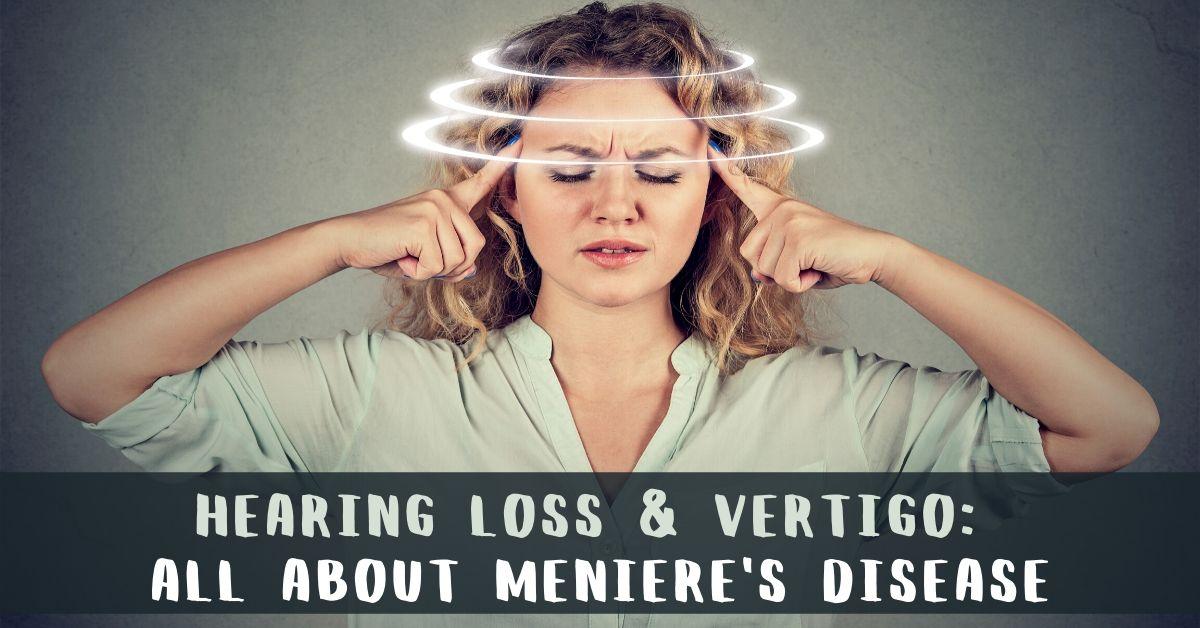 Dizziness and ringing in one ear accompanied by some degree of hearing loss could be symptoms of Meniere’s disease. A hearing health care professional can properly diagnose your condition and, begin treatment to help manage the symptoms.

Meniere’s disease was identified in the 1800s and named after the French doctor who discovered it. It is an inner ear disease that usually affects one ear and some symptoms include pressure or pain accompanied by dizziness or vertigo and hearing loss is also often present. A ringing, roaring, or clicking in the ears, called tinnitus, can sometimes affect people with Meniere’s disease, too.

Who is Affected by Meniere’s Disease?

Meniere’s disease can affect any age population, but people in their 40s and 50s are the demographic most likely to experience it. The condition is chronic and currently without a cure, but there are ways for Meniere’s to be treated, to both relieve symptoms and minimize hardship on your quality of life.

Meniere’s is believed to be connected to increased pressure in the inner ear (which is full of fluid known as endolymph), though it is difficult to detect the exact cause. Primary idiopathic endolymphatic hydrops is another name for Meniere’s meaning abnormal fluid in the ear.

There are many factors that can be attributed to acquiring Meniere’s. The following are possible triggers or causes:

Symptoms of Meniere’s disease vary with each person, but many people often experience a feeling of pressure in the ear, sudden dizzy spells, tinnitus, and muffled hearing or partial loss of hearing. Some people experience many attacks over several days and others may only have an isolated attack once in a while. In order to diagnose the disease, you must have tinnitus, hearing loss, and vertigo more than once. Meniere’s can be tricky to diagnose because all of the symptoms can stand alone as medical conditions or be comorbidities of other diseases.

Typically, symptoms begin with feeling pressure in the ear, followed by tinnitus, hearing loss, then vertigo. These episodes are often experienced as a collection of episodes followed by long remission periods and can last between 20 minutes to four hours. During an episode, it is best to lie down and focus on a still object. Many people report feeling better after a nap.

In some cases, people develop more serious degrees of hearing loss. These range from mild to profound and can generally be treated with hearing aids since it is classified as a sensorineural hearing loss.

The stages of Meniere’s usually develop over time and affect people differently.

Various home remedies can help to control Meniere’s disease, though none of them have been studied at length to measure the effects. Diet and lifestyle changes may show effects like decreasing the fluid levels in the inner ear and helping combat vertigo and dizziness, and these changes can benefit your overall health, too.

Drinking less caffeine can lessen the severity of tinnitus and reducing salt intake can prevent the body from retaining fluids. Many people have reported relieved symptoms after they have given up smoking, and working to manage stress and anxiety can prevent exacerbated symptoms of Meniere’s.

There are few medical treatments due to the need for more study, but two inner ear injections have seen clinical trial success: gentamycin, an antibiotic that helps with dizziness; and steroids to combat inflammation.

Other, less-studied treatments include: medications that treat dizziness; diuretics that treat fluid retention; and lastly, surgery to reduce inner ear pressure and fluid. Check with your hearing health care professional to see what options are best for you.