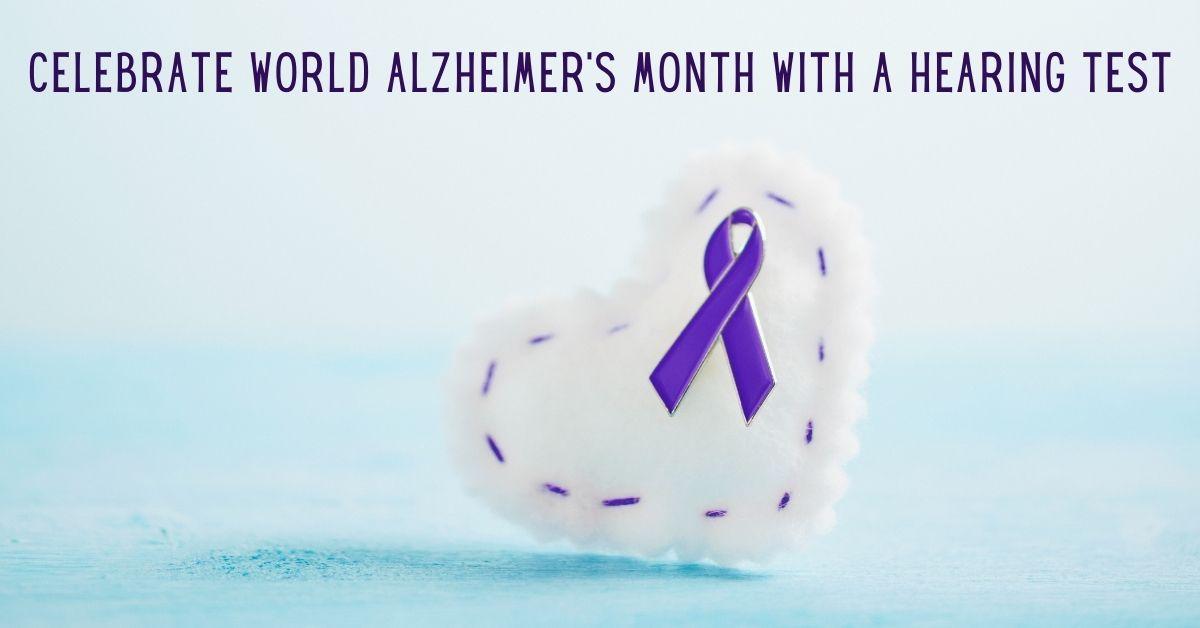 It’s World Alzheimer’s Month, and what better way to celebrate it than with a hearing test! That’s right! Alzheimer’s accounts for about 90% of cases of dementia, and while much remains unknown about the disease, one thing we know for sure is that it progresses faster when untreated hearing loss and/or social isolation are a factor.

The Link Between Hearing Loss and Alzheimer’s Disease

The relationship between hearing loss and Alzheimer’s disease is all about using the brain. When we can’t hear as much as we used to, our brain gets less information from our ears. Brains love information, and the phrase “use it or lose it” really does seem to apply.

Hearing loss is such an important factor in brain health because it creates two different in-roads for Alzheimer’s disease to take hold.

One of these in-roads has to do with the tendency for Alzheimer’s disease to develop when we don’t spend enough time with other people. You see, hearing loss tends to push us in the direction of social isolation. When we start having serious trouble hearing what other people are saying, our reaction is often to spend less time in their company. Evolutionarily, our big brains developed along with our social organizations. When we stop spending time with other people, our brains no longer get to do what they were built to do. Over time, the theory goes, this allows our neural networks to atrophy, and Alzheimer’s disease can progress freely.

Alzheimer’s disease can also take advantage of brain atrophy more directly, and this is the second way that hearing loss increases our vulnerability. When we start to lose our hearing, the robust auditory cortex in our brain receives less information than it used to. Even if we’re spending time amongst other people, we’re missing out on loads of information that our brain has come to expect from our ears.

And when we’re alone, we still miss the millions of environmental cues that our brain receives from our ears on a daily basis. Birds chirping, changes in the wind, cars driving by, the sound of our own footsteps as we move around, clothes rustling: all of these are used by our brain to help orient us in our environment. When we miss out on this information, we give our brain less of the picture than it’s used to getting.

What Can We Do to Prevent Hearing Loss and Alzheimer’s Disease?

Science seems to discover that there’s a genetic component to nearly every malady in existence, but this is less the case with Alzheimer’s disease and hearing loss. While a small percentage of cases of Alzheimer’s are shown to be genetic, these are usually early-onset cases (before age 65). Most of the genes that go into Alzheimer’s have more to do with a predisposition than a guarantee.

Hearing loss is an inevitability for anyone who lives long enough: nearly 100% of centenarians have hearing loss. While genetics can, again, predispose some of us to more aggressive hearing loss, it seems to have more to do with lifestyle than genes.

We’ve learned in recent years that a good diet—such as the Alternate Mediterranean (AMED) or Dietary Approaches to Stop Hypertension (DASH)—can do a lot to slow the progress of both hearing loss and Alzheimer’s, and that physical exercise in midlife definitely goes a long way to preventing Alzheimer’s. Other risk factors for both conditions include smoking, traumatic brain injury, and hypertension.

While there’s not yet a clear link between treating hearing loss and reversing Alzheimer’s disease, researchers in France demonstrated that patients with advanced cognitive decline were able to improve their scores on cognitive tests after wearing cochlear implants for one year.

The Better Hearing Institute recommends getting a hearing test once every decade until age 50, and once every three years after that. If you’re due for a hearing test, contact us today! Your loved ones and your brain will thank you.